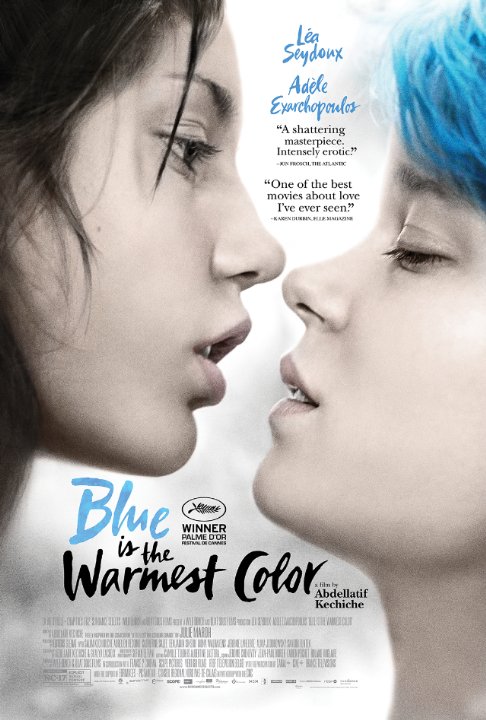 This is one of those movies you should never watch with your parents because it will be awkward and you don't want them to question you about it.

The story to Blue is the warmest Color is about a young lesbian couple from inception all the way through to one possible end.

Wow this took me a while to get around to watch this movie I mean originally I was going to watch this back in 2013 but at the time I was busy and after a while I forgot about the movie, until this year I finally watched it and wow let my just tell you that this movie is brilliant and I'm not just saying that because of the sex scenes, I really do think this is a real and honest look at young age sexuality.

The director of the movie Abdellatif Kechiche directs this movie so incredibly well and so magnificent that he understood teenagers today how they really act. It wasn't like Hollywood movies that normally get it totally wrong and have no clue on what teenagers are like today because Hollywood are just a studio with their heads up their own ass and have no clue on reality, then comes this movie that's not from a big Hollywood studio but from a different country and a different director who actually have touch of reality on it's characters and how young people discovering their sexuality, and that's why Abdellatif Kechiche pretty much made this movie work.

The writing was realistic and brilliant, the movie is 3 hours long and it flew by me just like that.

Now for problems: I haven't got that much to say when it comes to problems but if I have to really think of the things that I didn't like is that there are some scenes that I felt didn't really belong there and felt a bit fill, and that's it for problems, you see how small my problem was.

Blue is the Warmest Color may not be a easy watch for some people but it shows a realistic look on sexuality and young people today that I think is what makes this movie great from start till the very end.