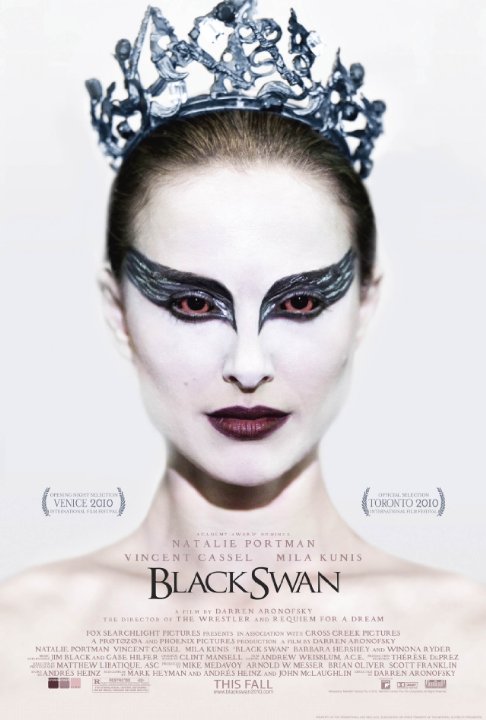 This astounding picture comes from the man who almost never disappoints me story-wise: Darren Aronofsky. He's a bit like Batman. Ordinary on the outside, but a masterful genius when doing his craft.

Natalie Portman deserved her Oscar. The way she portrayed Nina was innocent, fragile and honest.
Especially her transformation just made her more vulnerable and ambient in her role. The constant push in the film is for her to 'lose herself' in the black swan, since she had already mastered the white one. It felt like Portman was losing herself in the role simultaneously. What started out smalltime ended up as a triumph, much like the character.

You could really tell this was a Darren Aronofsky movie, because it had all the usual qualities. The eclectic dialogue, unstable camerawork and some scenes that feel beyond real. He just has a real flair to him, especially his grandiose finales. I love each one of them. This one included.
The way the film is structured is just perfect. The virtual and literal metamorphosis into the great black swan was outstanding, especially coming from such a shy, meek character.
Like most linear films, it is structured by three acts, and it almost feels like the third act has three acts. If that makes any sense. Anyway, it was just beautiful.

The screenplay is flawless. It may be the best he's ever written. The way the characters interacted in the visions and the conflicts were strung together was powerful.
Winona Ryder doesn't play a big part, a complaint most people bring forth, but I think her screen time was just right.
You see, that was the point of her character. The story of Black Swan is literally reminiscent of the story of Swan Lake.
A white swan (Ryder) falls in love with a prince (Cassel), but finds herself replaced with another (Portman), so she attempts suicide (Ryder). The story is about being replaced.

It's a thriving example of ambition, desire, failure and devastation. It's a cycle of imperfection that shows how much thriving to be the best can destroy you, and Aronofsky wrote and directed it beautifully. I wish I had seen this in 2010.