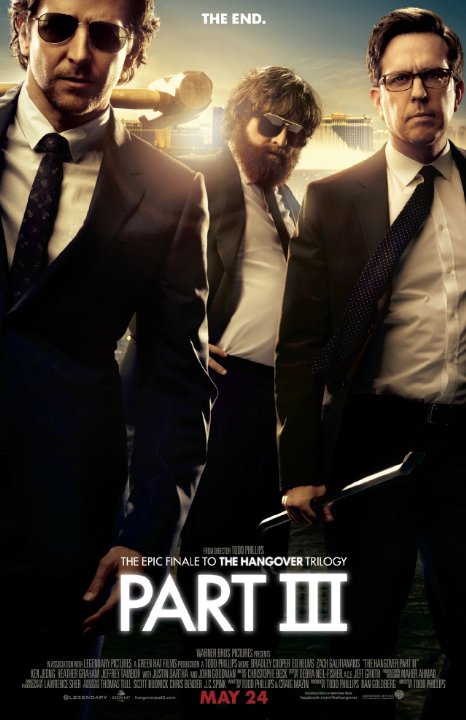 Remember how great The Hangover was? How unpredictable, how out-of-control, and above all, how hysterical it was? Remember how exhilarated and out of breath you were when it ended? Remember the gallons of respect you've gained for director Todd Phillips after you watched it? Then remember how you questioned The Hangover 2 when it was first announced and you were curious to see what they'd do with it? Remember after watching the trailer, you had the highest of all hopes? Then after watching the movie, remember how sad and letdown you were due to the fact that there wasn't much of anything lively or outrageous in that film? Oh, and remember how you complained that it was really just the same shit as the first film except moved to a different city, as if it was completely ripping off its own original? Finally, remember quite recently when they announced Hangover 3, and you sighed with sadness until you found out they were taking a different direction? No hangover, no Roofies, just the wolf-pack back together in "an epic finale." Remember you had that sense of hope that this might be great fun, then when it comes out, you're left not as satisfied as you were the first time around, but not as pissed off as you were the second time around? Instead, you left with a shrug, right? I don't know if this is how the trilogy worked for you, but this is my viewpoint on it. Basically speaking, The Hangover 3 stinks, but not as much as the second film.

My criticism for The Hangover 2 was that it was, more or less, a carbon copy of the original minus the energy and the laughs. Comparing it to the original, Hangover 3 is basically a decent stinker, but it's devoid of the energy and the consistent laughs - and the tonally different pace and directions in terms of plot isn't very compelling. I say this: kudos to Todd Phillips and the creative team for going outside the box and trying to deliver something different and fresh. But shame on them for, like Hangover 2, leaving out the energy, the outrageousness, and the great comedy that made the original so good and made these amazing characters truly shine.

The filmmakers decided to leave out the hangover this time around, and instead throw a different problem at the wolf-pack. That's fine, and I'd actually prefer that, but the execution was too weak. There's nothing rich, authentic, or even funny that goes on in regards to plot or term of events. This film feels so dark and so stale - it aught to be labeled as a thriller rather than a comedy. There's an opening sequence that seriously felt as if it came out of a movie like Se7en or Memento. Watching this film, I was under the impression that the film was so unwanted and unneeded that the actors just worked their way through it, expecting the cash to come pouring in soon so they can end it and move on with their lives. It really felt careless and soulless. Due to this, most of the humor is very forced and flat.

But I just can't call this a bad movie. Yes, it's a soulless and occasionally joyless film, but there's some good moments, a couple fun scenes, and a few good laughs. Hangover 3 rarely has a big laugh-aloud moment, but when it happens it's great. There's a sequence about a quarter of the way through the end-credits that results in an eruption of laughs and howls. It's a really great moment that'll take you back to the aftermath scene in the first film.

Another thing that makes me not totally hate this film - and what made me marginally hate the second film less - is the characters. They were so well introduced in the first film, you just can't help but love them in any movie they're in. Phil (Bradley Cooper) and Stu (Ed Helms) are put more to the side this time around in favor of Alan (Zach Galifianakis) and Mr. Chow (Ken Jeong), which is disappointing, but they still have their occasional moments. The problem is: being that Alan and Mr. Chow are much more central to the movie's plot, and being that they have great comedic qualities to them, you expect some really funny stuff. They're there, but very rarely. I'm surprised by how much I didn't laugh at this movie. The plot, while slightly underwhelming, is fine enough to hold your attention from beginning to end, unlike Hangover 2 where it's exactly the same as the original, you basically know how it's going to end. You'll still be interested in what the characters face, what happens to them, and where they end up.

All in all, The Hangover 3 doesn't quite achieve the measures it wanted to. It's the end - but not a very funny or fully satisfying end. It's worth renting if you're interested or if you liked the first one, but you're likely to forget all about it after 20 minutes.