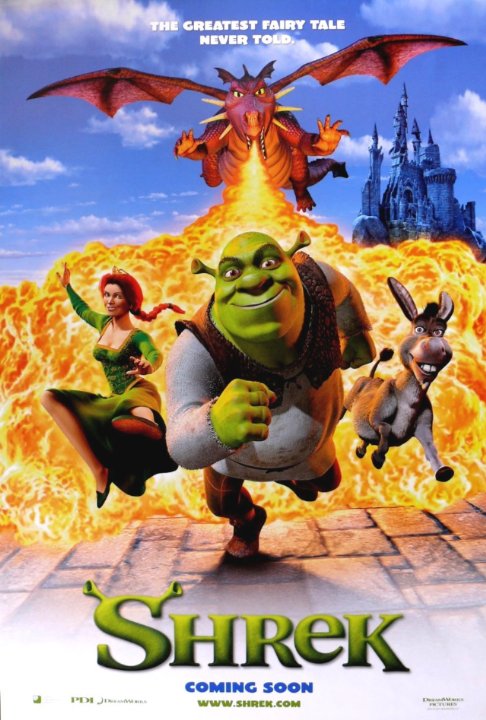 Shrek- like the Dreamworks CGI film that preceded it, Antz- attempts to target an older audience in comparison to competing companies like Disney and Pixar. And yet, curiously enough, most of Shrek's jokes are just plain childish. Surely the absurd amount of gross-out gags contained within the the first 5 minutes of the film weren't meant to entertain adults, were they? Yes, there is some edgy content that will appeal more to adults, and some humor that kids won't get, but for the most part, nearly everything contained within Shrek is just kids stuff. And pretty weak kids stuff at that.

Shrek is sort of a parody to the classic Disney films, and various fairy-tales. Shrek, an ogre, has his swamp suddenly populated with fairy-tale characters. Furious, Shrek complains to the person responsible- the villainous Lord Farquaad- and demands to have his swamp back to the way it was. Lord Farquaad offers to give Shrek his swamp back, but only if he saves Princess Fiona from a tower guarded by a dragon, and brings Fiona back to his castle. This is so that Farquaad can marry Fiona and become king. Shrek agrees, and so he embarks on this quest, along with a talking donkey named...Donkey.

Shrek isn't funny enough, nor emotionally satisfying enough to compete with even the lesser efforts of Pixar or Disney. The humor is rarely very funny, as much of it appeals to a much younger audience than what we're led to believe by its much stronger parody elements. And sadly enough, these bits of parody humor are only evident in the first half of the film. After that, Shrek is your run-of-the-mill children's flick. Ironically, Shrek ultimately becomes the very thing it's poking fun at, except immensely watered down.

Had the film focused more on its parody humor, and less on its generic romance story, Shrek could've been a reasonably good time. But alas, Shrek decides to abandon one of its only working components in the second half of the film, resulting in a largely uninteresting 90 minute trudge that feels much longer than an hour and a half.

While a number of the fairy-tale oriented characters are pretty funny, the main three characters that the film chooses to focus on (Shrek, Donkey and Princess Fiona), are an absolute bore, if not completely unlikable. Shrek is an uninteresting character (and his grumpy nature makes him extremely unlikable at times), and Donkey is rarely funny, and is more often obnoxious. Fiona is a cardboard cut-out of the "girl-that-fights-for-herself-and-has-an-attitude" that we've all seen far too many times to care much about.

The more interesting characters, like Gingy (the Ginger-Bread Man), the three blind mice, and the three little pigs, get little more than a line or two in their measly roles. They're funny when they're onscreen, but they get, perhaps, a minute and a half total of screen time. The fairy-tale creature with the most screen time is the Magic Mirror of Snow White fame, though even his role his relatively small.

Mike Meyers as Shrek is instantly forgettable, and is accompanied by a half-hearted Scottish accent. Eddie Murphy is easily the best of the voice talents, providing energy and excitement to the character, even with less than engaging material. Cameron Diaz and John Lithgow are forgettable in their roles, and don't make any kind of lasting impression.

The animation, while not quite up to today's standards, still holds up pretty well. The character designs are nothing to write home about, and the humans are a little clunky, but the environments look pretty good, and there are some relatively impressive sequences.

The score, composed by dynamite duo Harry Gregson-Williams and John Powell, is very good at times, especially when utilizing the heroic main theme. But when the soundtrack kicks in, utilizing dated pop and rock songs that feel completely out of place in the film, Shrek begins to feel more and more like a mere product as opposed to a film.

While it's not unwatchable, Shrek lacks the laughs and the heart to compete with Disney or Pixar. The parody elements are used far too little, and the the bland characters and predictable plot that the film chooses to focus on will likely bore older audiences. There are brief moments of inspiration and clever humor, but they don't come nearly often enough to make up for the tired and helplessly blah story it encompasses.