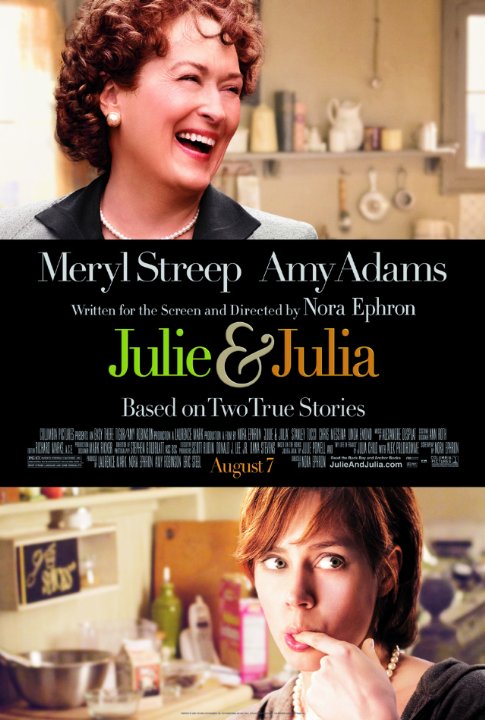 Before I begin this review, I will warn you that I may overuse the word "charming," as there is simply no other way to describe almost any aspect of Julie & Julia. Everything from the acting, the cinematography, the stories, the music, is charming, and there is hardly another way to explain it. This is a film I fell in love with, and enjoyed to the very end. When the movie ends, you want more. Indeed, I was enchanted, delighted, and yes- charmed.

Julie & Julia is based off of two books: "Julie & Julia" by Julie Powell, and "My Life in France," by Julia Child. The film tells two separate stories, about two aspiring chefs and writers. One is about Julia Child, a joyful and butter-loving woman who falls in love with Paris after moving there with her husband, and attempts to find a hobby, until she finally decides on cooking. The other story is about Julie Powell, a young woman struggling with her unpleasant cubicle job, who decides to write a blog, detailing her challenge to make all 524 recipes in Julia Child's "Mastering the Art of French Cooking" in 365 days.

From the very minute the film starts, and we see Meryl Streep as Julia Child, one can't help but enjoy every little bit of her performance. Every minute Julia Child is on the screen, the film is enchanting. And while this does cause Julie Powell's half of the film to seem less enjoyable by comparison, you grow to love Powell's story as well.

It's been a long time since I've laughed so much in a film. The charming script provides plenty of laughs and amusing lines for the characters to say. But that's not to say the more thoughtful parts aren't done well. Because while they're not as polished as the comedy, they're meaningful and believable. Indeed, certain moments are quite touching.

There's not a single dull moment in the film. Julie & Julia is as charming as a film gets, and I enjoyed every minute of this beautiful treat.

The acting is excellent. Meryl Streep as Julia Child might be one of the best performances I've ever seen. She's funny, and utilizes a number of charming intricacies. And while the rest of the cast has trouble matching what Streep is doing so well, they're still great. Amy Adams as Julie Powell is a thoughtful performance, and while not without it's humorous moments, is more serious than Streep's. Other notable performances include Stanley Tucci as Paul- Julia's husband- Linda Emond as Simone Beck, and Jane Lynch as Julia's sister Dorothy.

The score, composed by Alexandre Desplat, is charming like the rest of the film. The French sensibilities perfectly compliment the sweet main themes, and memorable violin statements. The score also adds an extra emotional layer that increases the poignancy of certain scenes.

An ideal comedy -that even at 123 minutes, it never feels long- that includes brilliant performances, and a wonderful script (as well as a beautiful score), Julie & Julia is one of the most memorable films I've seen all year. I was immensely sad when the film came to a close, not because the ending was sad, but because I had enjoyed myself so much during the film. Indeed, I imagine that I'll be returning to Julie & Julia sometime in the future, an occasion to which I'm very much looking forward to.