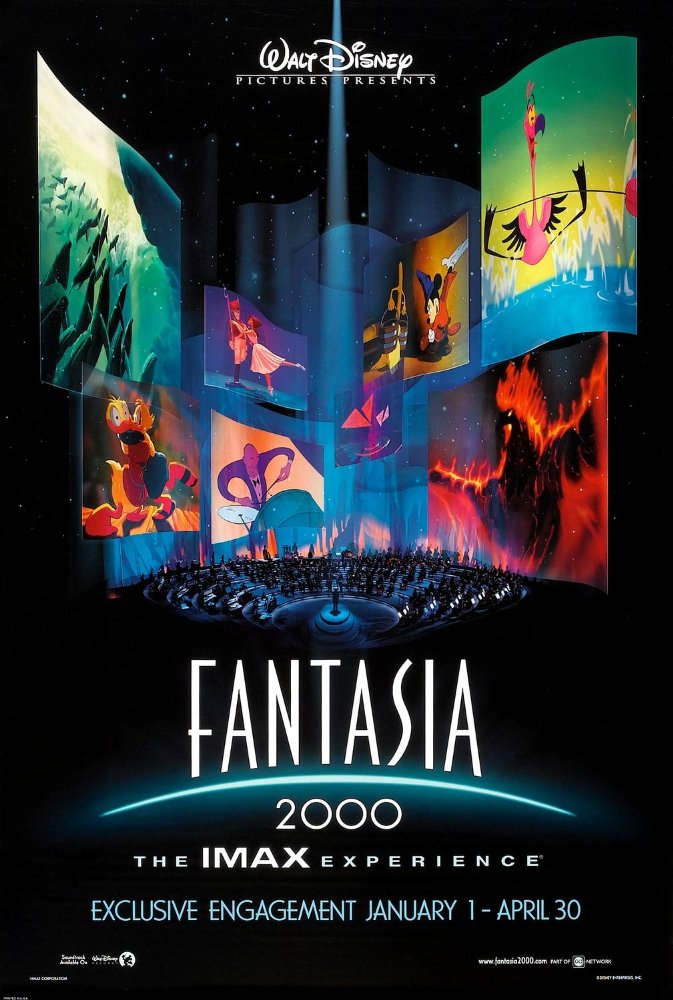 Disney's Fantasia was released in 1940, and though it was unpopular upon initial release, today it is considered one of Disney's best films. Personally, I found it to be immensely overrated, and downright lazy. And yet, I have found Fantasia 2000, the much anticipated sequel, to be entertaining and unique, and a massive improvement on the lacking original.

Fantasia 2000, like the 1940 original, has no single plot, but is made up of a series of animated segments with classical music scoring each segment. I will cover each segment in my review.

The opening segment is Beethoven's Symphony No. 5. This is basically just a bunch of abstract images put to music. As I was watching this segment, I was not only uninterested in the "events" onscreen, but I began to dread the rest of the film. This was essentially just 1940's Fantasia all over again.

The second segment, Pines of Rome by Ottorino Respighi did little to improve my mood. This segment just followed a bunch of poorly-animated flying whales around for 10 minutes. Hardly brilliant film-making.

It was when Fantasia 2000 reached the third segment, when I began to enjoy myself. With the delightfully fun and jazzy Rhapsody in Blue playing (composed by George Gershwin) and a series of entertaining stories and characters revealed throughout, this is the best segment in the film. If the entire film was like this single segment, Fantasia 2000 would've been an inarguable masterpiece. As it stands, this is just an unusually good segment in an otherwise decent film.

The fourth segment, Piano Concerto No. 2 composed by Dmitri Shostakovich, is mediocre. Based off of Han Christian Andersen's "The Steadfast Tin Soldier," this fourth segment offers interesting animation and character designs, but little else.

The Carnival of Animals, Finale, composed by Camille Saint-Saens, makes up the fifth segment, and one of the better ones. Short and sweet, this segment is about a flamingo who enjoys playing with yo-yo's, much to the disgust of his friends. This funny and energetic segment is memorable, and is also highly reminiscent of Pixar's 1986 short, Luxo Jr.

The sixth segment is hugely unnecessary. I honestly can't believe Disney did this, but the sixth segment is "The Sorcerer's Apprentice" short from the 1940 Fantasia film. No changes of any sort have been made. Why is this here? If we really wanted to see this short, we would just go see the original film! It doesn't help that this short is so forgettable. Not unlike many of the other segments in either film, The Sorcerer's Apprentice is artistically interesting, but little else.

The seventh segment is Pomp and Circumstance- Marches 1, 2, 3, and 4, composed by Edward Elgar. This segment is a re-telling of the story of Noah's Ark, and the music choice here is quite inspired. While this short is beautifully animated and actually extremely touching, it suffers from one thing: Donald Duck.

Donald Duck is the main character here, and though that's not a problem in itself, the filmmakers chose to make Donald mute. We do not hear him speak in this short, which immediately makes him lose all of his charm. This was likely done to draw more attention to the music, but this gives Donald Duck no reason to be here, other than to attract little kids. I have the utmost respect for Disney, but the way the company insists on pandering to children is frustrating.

The final segment is Firebird Suite composed by Igor Stravinsky. The simple short involves a sprite that accidentally awakens a Firebird, which causes mass destruction. This segment features jaw-dropping animation, but the story itself is dull and unfocused.

The segments themselves are a mixed bag, and the same can be said for the intros. Each segment (with the exception of the first segment) is given an introduction from a celebrity.

The first introduction (for the second segment) is given by Steve Martin. His cameo is not funny, and also feels very phoned in. The intro for the fourth segment is given by Bette Midler. It gives us some interesting background about Fantasia segments that were never completed, but this intro is basically the equivalent of being given an array of presents, then having them all quickly taken away.

The introduction for the fifth segment (by James Earl Jones) provides a chuckle. The intro for the sixth segment is given by Penn Jilette and Raymond Joseph Teller, and is the best of the intros, and actually more entertaining than the segment itself.

The intro for the seventh segment features Mickey and Donald, and it's worth a few laughs. The other intros are immediately forgettable and not worth further mention.