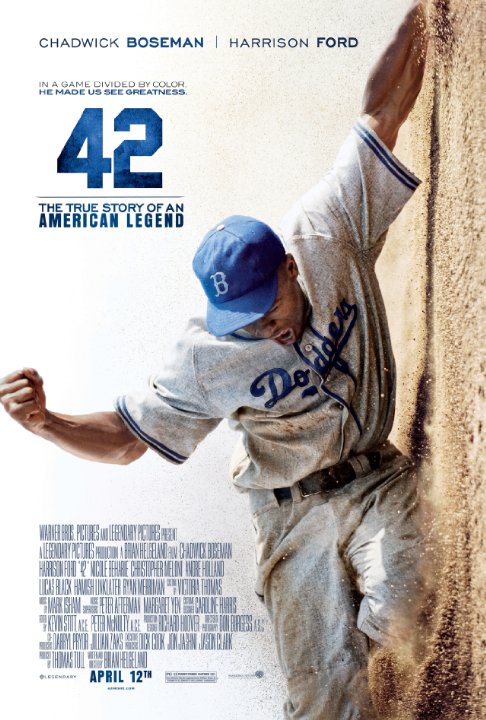 Like most sports movies, 42 is easy to like, but hard to love. The underdog story is worth cheering on, and the protagonist is likeable enough to root for. A little humor, some soft moments, and the written epilogue adds up to a whole lot of formula, but still makes for a surprisingly engaging baseball tale.

Jackie Robinson is making history as the first African-American to break the baseball "color line." Only white men had previously been accepted as professional baseball players, but Branch Rickey decides it's time for an exception. Still, this is no happy ending, as Robinson must learn to control his temper, and stay cool under pressure, as thousands of baseball fans would love to see the man dead.

Let me make it clear that 42 does almost nothing that one could consider to be unexpected, or innovative. This is a baseball underdog story and nothing more. Those hoping for something different will find themselves bored, and possibly predicting scenes in the movie before they happen. But for those willing to accept 42 for what it is; a story about a black man's journey to success in baseball, this is an acceptable biography.

The length is the biggest issue (second to 42's predictability). At just over 2 hours long, 42 wears out it's welcome a bit. About an hour in, I started to check my watch relatively often. 42 certainly would've benefited from a shorter run time.

The acting is good, but lacks depth. Harrison Ford provides a reliably strong performance as Branch Rickey, and Chadwick Boseman as Jackie Robinson is easy to like. No one really stands out much, but you'd be hard pressed to find a performance here that isn't believable.

The score by Mark Isham is predictably sappy. From the piano solos, to the horn melodies, and the lively string bits, this is a by-the-numbers "heart-warming" score. It's pleasant, and works for the movie, but this isn't a score I'll be seeking out for my soundtrack collection.

42 is a likeable film. Production values are sound. Acting is good. There are some laughs on the way, and a surprisingly moving speech by Branch Rickey near the end. Still, 42's formulaic structure and unnecessary length is an issue. There are some slow stretches, and it's obvious from the start where this story is going. But considering how little interest I have in the world of baseball (or even sports in general), 42 wasn't such a bad little flick. And it's certainly better than any other 2013 release I've seen this year.