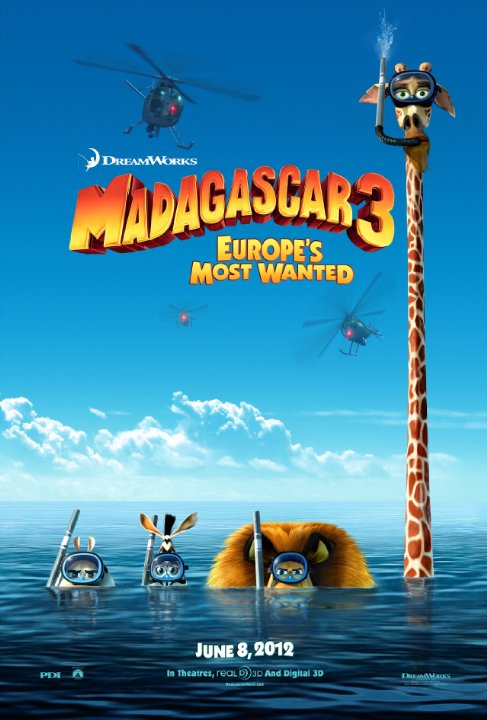 A common trend in Dreamworks films, is that they have an incredible beginning, and fall to pieces within half an hour. Unfortunately, the same can be said for Madagascar 3, which runs out of steam quite shortly.

Alex, Marty, Gloria, and Melvin attempt to make their way from Africa to New York. But first, the gang have to pick up the penguins at Monte Carlo so they can all fly home. Unfortunately for them, their ride is totaled and they are being pursued by a French animal hunter named Chantal DeBois. In order to get away, the gang joins the circus where they must actively train and keep their eye out for DeBois.

From the point where Alex and Co. get to the penguins (within 5 minutes of the film's opening) to the point where they join the circus is marvelously zany and energetic entertainment. The rest is just plain dull with the occasional chuckle to ensure that the audience won't fall asleep.

This second sequel feels extremely forced. Everything was perfectly resolved in the last film, so it's quite obvious that the filmmakers were really struggling to make Madagascar 3 work. On top of that, Alex's parents from the second are completely omitted. At first, this isn't a big deal because they weren't particularly interesting characters to begin with, but you can't simply omit primary characters without explanation. A simple good-bye scene would've worked.

New characters are dull and mostly personality-less. Otherwise, they're stereotypes. Character development is minimal, and what little development there is ends up being rushed and forced.

Most of the time, there's not really very much going on. There are long stretches were nothing happens, and when something occurs to actually develop the plot, it's typically rushed. Even in it's brief 93 minute run time, Madagascar 3 feels like an eternity.

Madagascar 3 runs on cliches and slapstick humor (the latter is practically a cliche in itself). Inconsistencies among characters and personalities are also present. And while we're naming flaws, it might be worth pointing out that this series really doesn't have anything to do with Madagascar anymore.

Madagascar 3's strength is not expected of it's character development or plot, though. Where Madagascar 3 should excel is in it's humor. Sadly, it fails to satisfy even in this single aspect. After the first 20 minutes, there are almost no laughs. Are there smiles? Sure. You might even get a chuckle every now and then. But that's about it. Surely a basically plotless animated film would have some decent humor to boast, but Madagascar 3 falls short here.

Animation is one of the few places where Madagascar 3 succeeds. Easily surpassing the best the first two had to offer, the animation in Madagascar 3 is marvelous, and even a bit jaw-dropping at times. Bright colors and surprising detail makes Madagascar 3 a winner in the visuals department.

Voice talents are energetic, a word that cannot be used to describe this lifeless film. Ben Stiller provides a recognizable voice for Alex, and Chris Rock is perfect for Marty. David Schwimmer is sadly underused as Melvin, however, and it would've been nice to see more of Cedric the Entertainer.

The score by Hans Zimmer, while a bit generic as a whole, handles the character of DeBois quite cleverly with something of a French tango. Ultimately, the theme could've used a bit more development, but this is still a step up from Zimmer's other Madagascar scores.

In a rare moment of creativity, a clever remix of "I Like To Move It, Move It" and the Circus Afro song (if you've seen any of the commercials, you know what I'm talking about) plays during the credits. Had the rest of the film been as unexpectedly clever and energetic as the remix (and the first 20 minutes), Madagascar 3 could've been a delightful surprise. Instead, Madagascar 3 marks the weakest chapter in the series that will only entertain those who enjoyed the previous two entries.

You would almost wonder if this is the last of the series, as the ending wraps the film up so well. Would Dreamworks have the intelligence to even consider ending the series here? With nearly 740 million dollars grossed, and a strong fanbase, I think the answer is obvious. Even when there's nothing left to tell, you can leave it to Dreamworks to squeeze every last penny out of any of their films that have even become a moderate success.