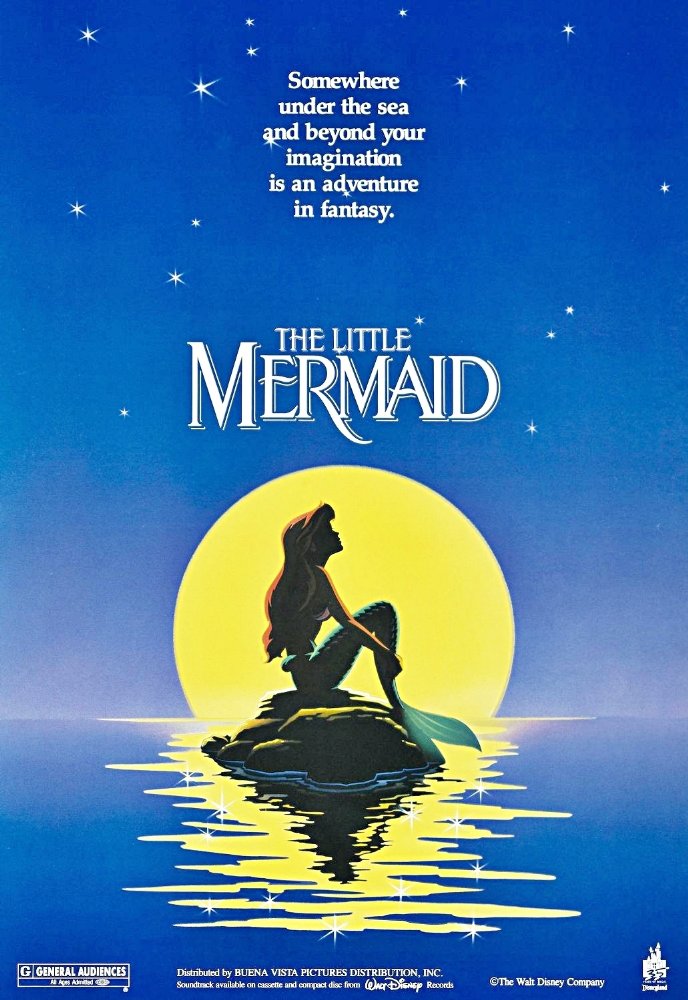 Ariel, a young mermaid of just 16, is fascinated by the world above sea level. But her father and king of the ocean, Tritan, as well as a musical crab named Sebastin, is worried for her safety. But after saving a human, Prince Eric, from drowning, Ariel is determined to go back to the surface and not only see him, but to marry him as well. Naturally, Tritan doesn't allow it, so Ariel finally betrays her father, and accepts magic from the sea witch, Ursula. Ariel is transformed into a human, but only can remain as such for 3 days. If she fails to kiss Prince Eric before those three days are up, Ariel will belong to Ursula. And it doesn't help that Ariel completely loses her voice as part of the deal.

I'll admit, I wasn't all that impressed during the first 20 minutes to half hour. Yeah, the animation was nice, and the songs were spectacular, but it was all just a little...good. I was expecting "great," so merely "good" was a little disappointing. Thankfully, The Little Mermaid quickly got better after this.

The songs, as I just mentioned, are spectacular. There's the grand "Part of Your World," the upbeat "Under The Sea," the sinister, "Poor Unfortunate Souls," the romantic, "Kiss The Girl," and my personal favorite, "Les Poissons," which is a song that Eric's chef sings about the art of making sea food meals, much to Sebastin's distress.


The characters are generally memorable. Sebastin is a bumbling stick-in-the-mud, Scuttle is loony and terribly stupid, and the film's villain, Ursula, is certainly one of my favorite Disney villains. However, I found Ariel to be a bit of a brat, and Prince Eric is no different than any other prince Disney has produced.

I personally didn't see anything in the score that could've caused The Little Mermaid to win an academy award, but alas, it did. That's not to say the score (composed by Alan Menken) is completely dull, because there are some moments where the music really shines, it's just a little underwhelming for an award-winning score. The lyrical songs are much better.

The Little Mermaid is undeniably entertaining. There are moments of fun, moments of romance, and lots of memorable songs and characters. In the end, it's not my favorite Disney film, and it's not quite a masterpiece, but I'd be a liar to say I didn't have a good time.