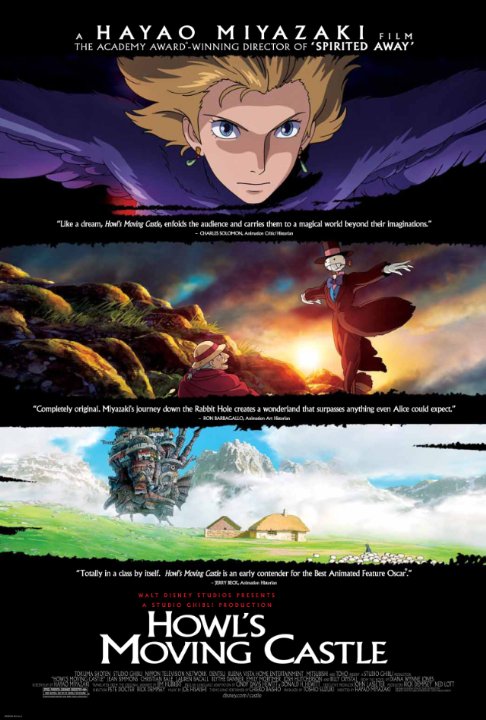 Based on Dianna Wynne Jones' beloved novel, HOWL'S MOVING CASTLE is the ninth animated feature from Hayao Miyazaki. It's about a young girl who becomes cursed with old age by a jealous witch; to break the spell she must travel to the titular structure and deal with its enigmatic owner, the charming yet mysterious wizard Howl and his carping fire demon, Calcifer. While I was admittingly disappointed with this movie upon my first viewing (I was expecting another action-adventure story along the walls of PRINCESS MONONOKE and CASTLE IN THE SKY; this film concludes in a more drawn-out manner than SPIRITED AWAY did), it has nonetheless grown on me and is very much another Miyazaki masterpiece. It's an undeniably gorgeous film, with imaginative set pieces and charming, characters that come across as loveable (including a feeble old dog who communicates with wheezes) and fully defined (the supposedly "wicked" witch isn't as bad as she initially appears to be), making HOWL'S MOVING CASTLE a delightful way to pass two hours of one's time. Continuing with their top-quality treatment of Ghibli's output, Disney supplies yet another fantastic English dub, with excellent performances from everyone involved, especially Billy Crystal, who scorches up every scene he's in as the fiery Calcifer (hey, he's hot).