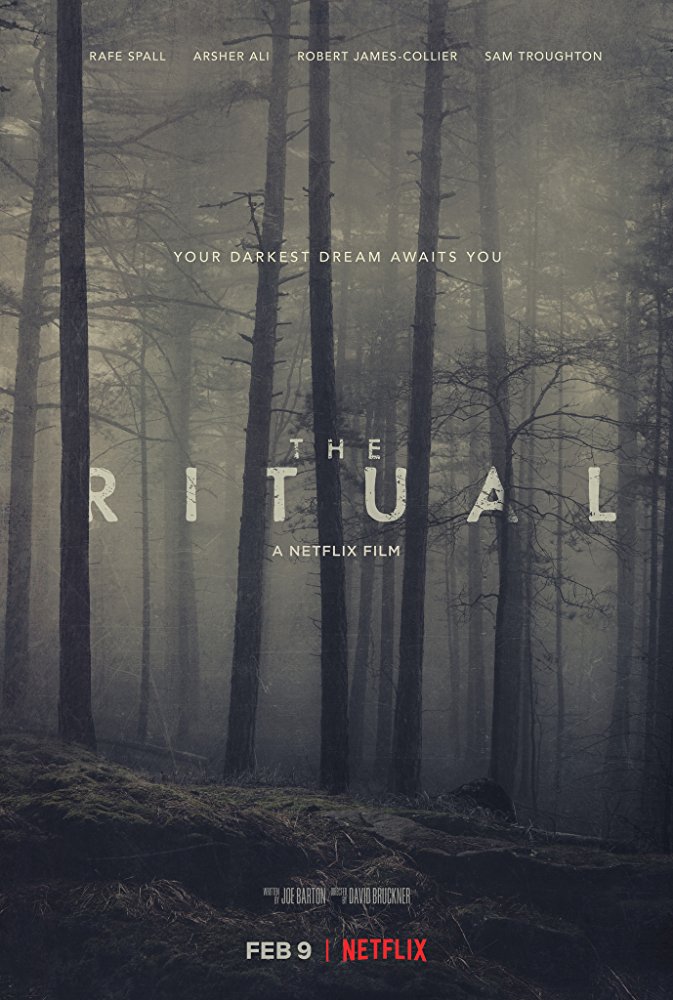 Plot: A group of college friends reunite to celebrate the memory of one they lost on a hiking trip. But when one gets injured, they decide to cut through the forest to save time - but this forest is home to a malevolent spirit, and it doesn't like being disturbed. -- Chris Kavan

This is definitely in the category of atmospheric horror and, thought it isn't found footage in any way, owes a lot to the Blair Witch Project - creepy woods, creepy house in the woods, creepy things made out of wood - you get the idea. The Ritual does have more people, and the creature is truly unique out the massive amounts of horror films I have seen (and unnerving). It's effective horror, but the characters never really make an impact and so when the deaths come, it is more "meh" than "wow". If you're hard up on a dark night, this is a decent option.

âHe was a good man.
The best of us.
It should never have happened.
But it didâ¦
And all we can do is remember him.
Robert, we miss you, mate.â

âThe Ritualâ is a British horror that takes place in a Swedish forest where four friends go on a hike in honor of a deceased friend. After seeing so many films where a dark forest provides terrifying and life-threatening situations, I made a decision. Iâll never spend a weekend somewhere in a forest far from the civilized world in my life. Much too dangerous. In addition, itâs also certain that Iâll watch more of those Netflix Originals. Because these films, which are sometimes turned down by big film companies, really arenât so bad.

âThe Ritualâ, however, wasnât a complete success. The first part is without a …

Watched in 2018 by Leighann Paige

No posts have been made on this movie yet. Be the first to start talking about The Ritual!