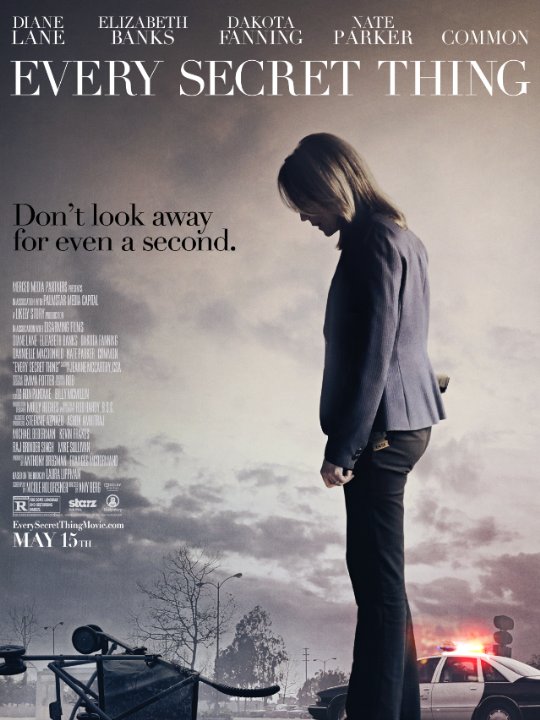 Plot: On a typical suburban morning, a baby goes missing from her front porch. Two young women are charged with the crime and sentenced. Seven years later they are released, but soon after, another baby goes missing. A detective finds herself dealing with a community that has never fully healed from the original crime, and one which seemingly everyone has a secret to hide. -- Chris Kavan

'Every Secret Thing' is Every Mother's Nightmare

I wasnât sure what to expect from "Every Secret Thing" other than an enjoyable cast. This movie has an odd predilection for biracial baby abductions. Two girls, Ronnie Fuller (Dakota Fanning) and Alice Manning (Danielle Macdonald), are the prime suspects of the latest kidnapping. Two detectives, Nancy Porter (Elizabeth Banks) and Kevin Jones (Nate Parker), are in charge of nabbing the abductors. Caught in between is Helen Manning (Diane Lane), who is the mother of Alice and protector of Ronnie, whom she has favored ever since Ronnie was a little girl.

The word twisted doesnât even begin to describe the motivations of neither Alice nor Ronnie, let alone Aliceâs detached mother. Helen and Aliceâs mother/daughter relationship is unquestionably Jerry Springer material. …

The movie was plain average.

"Do you ever wonder what would have happened if maybe you had found the baby sooner? Maybe you could have saved her. Maybe if you had walked just a little bit faster, she would still be alive. Did you ever think about that?"

"Every Secret Thing" is a meager attempt to create a thriller full of suspense. The inspiration came from a book written by Laura Lippman. Usually a story about missing children makes you feel uncomfortable and tells about the most terrible thing that can happen to you as a parent. However, I would recommend to watch "Prisoners" starring Jake Gyllenhaal and Hugh Jackman. In terms of suspense and showing the desperation of the frightened parents, this film transcends effortlessly this shallow attempt. The two teenagers Alice (Danielle Macdonald) and Ronnie (Dakota …

On the surface, Every Secret Thing is a standard crimer/thriller/mystery - a murder, suspects released followed by an eerily similar crime shortly after... but what sets it apart is the strong female cast and the revelation that the most manipulative people are often the most unassuming as well.

The film centers on two young women, Ronnie Fuller (Dakota Fanning) and Alice Manning (Danielle Macdonald) who were both sentenced to juvenile detention after taking and ultimately killing a young mixed-race baby. Now, after both have served their time and attempted to rejoin society, another mixed-race baby goes missing. Detective Nancy Porter (Elizabeth Banks) is on the case with her partner Kevin Jones (Nate Parker) and she soon ties the two cases together. She has little help from Alice's …

No posts have been made on this movie yet. Be the first to start talking about Every Secret Thing!