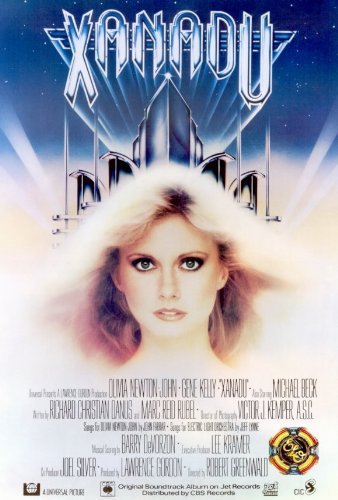 Plot: The Greek Muses have taken human form to inspire mankind. One of them, taking the name Kira, has found a person to inspire in the form of artist Sonny Malone. With the help of Danny McGuire, a man she helped inspire years earlier, she will create a disco roller rink. -- Chris Kavan

Xanadu (1980) Olivia Newton-John stars as Kira, a muse sent to earth to inspire a mortal and down-on-his luck artist (played by one of the worst leading men of all time, Michael Beck). But, Kira goes too far and gets into trouble with the gods because she falls in love with the artist. The great Gene Kelly (in his last film) plays a former big-band leader with dreams of opening a new night club. This is a musical, and the music was done by Newton-John and Electric Light Orchestra. Some of the songs are almost tolerable, but the dance numbers are bad as some happen on roller skates (they were big in the disco era), and the camera work is just horrible, shot with little thought. The most amazing thing about this film is an appearance by the alt-rock band, The Tubes. - See more at: …

No posts have been made on this movie yet. Be the first to start talking about Xanadu!