FROM THE BIG SCREEN
"Fantastic Beasts: The Secrets of Dumbledore" (2022) Professor Albus Dumbledore (Jude Law) knows the powerful Dark wizard Gellert Grindelwald (Mads Mikkelsen) is moving to seize control of the wizarding world. Unable to stop him alone, he entrusts Magizoologist Newt Scamander (Eddie Redmayne) to lead an intrepid team of wizards, witches and one brave Muggle baker on a dangerous mission, where they encounter old and new beasts and clash with Grindelwaldâs growing legion of followers. 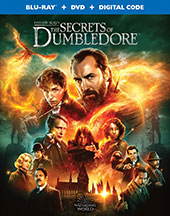 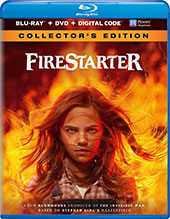 After being experimented on by a secret government entity called The Shop, Andy McGee develops psychic powers and meets the love of his life. Together they have a daughter with a power of her own and The Shop will stop at nothing to get them back. Protected by her parents (Zac Efron and Sydney Lemmon), Charlie (Ryan Kiera Armstrong) has lived her childhood on the run and has kept her extraordinary pyrokinetic powers in check. But now that sheâs turning 11, the flames are harder to control, and sinister forces are seeking to capture her. Charlie must learn to embrace the fire from within and fight to control it in order to protect her family and freedom. Vitals: Director: Keith Thomas. Stars: Zac Efron, Ryan Kiera Armstrong, Sydney Lemmon, Kurtwood Smith, John Beasley, Michael Greyeyes, Gloria Reuben. 2022, CC, MPAA rating: R, 95 min., Horror, North American box office gross: $9.252 million, worldwide $13.884 million, Universal. Formats: DVD, Blu-ray/DVD Combo + Digital Code, VOD, Digital. Extras: Alternate ending; deleted and extended scenes; gag reel; "A Kinetic Energy" behind-the-scenes with cast and crew; "Spark a Fire" look at how the story and themes were adapted from the famous novel; "Igniting Firestarter" behind-the-scenes look at how some of the most extreme fire effects and stunts were accomplished; "Power Struggle" effects and stunts breakdown; feature commentary with director Keith Thomas. Read more here 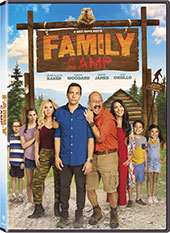 Stealing. Cheating. Killing. Who says romance is dead? In 1993, action movie supremo Tony Scott teamed up with a hot new screenwriter named Quentin Tarantino to bring "True Romance" (1993) to the screen, one of the most beloved and widely-quoted films of the decade. Elvis-worshipping comic book store employee Clarence Worley (Christian Slater) is minding his own business at a Sonny Chiba triple bill when Alabama Whitman (Patricia 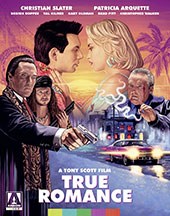 Arquette) walks into his life - and from then on, the two are inseparable. Within 24 hours, they're married and on the run after Clarence is forced to kill Alabama's possessive, psychopathic pimp. Driving a Cadillac across the country from Detroit to Hollywood, the newlyweds plan to sell off a suitcase full of stolen drugs to fund a new life for themselves ... but little do they suspect that the cops and the Mafia are closing in on them. Will they escape and make their dream of a happy ending come true? Breathtaking action set pieces and unforgettably snappy dialogue combine with a murderers' row of sensational performances from a stunning ensemble cast in Scott and Tarantino's blood-soaked, bullet-riddled valentine, finally restored in dazzling 4K with hours of brilliant bonus features. In four editions: 4K Ultra HD; Blu-ray; Dual Format 4K SteelBook - Limited Edition; Dual Format Deluxe 4K SteelBook - Limited Edition. New 4K restorations of both the Theatrical Cut and the Director's Cut from the original camera negatives by Arrow Films. From Arrow Video/MVD Entertainment. Read more here ... 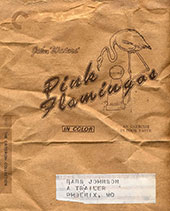 John Waters made bad taste perversely transcendent with the forever shocking counterculture sensation "Pink Flamingos" (1972), his most infamous and daring cinematic transgression. OutrÃ© diva Divine is iconic as the wanted criminal hiding out with her family of degenerates in a trailer outside Baltimore while reveling in her tabloid notoriety as the âFilthiest Person Alive.â When a pair of sociopaths (Mink Stole and David Lochary) with a habit of kidnapping women in order to impregnate them attempt to challenge her title, Divine resolves to show them and the world the true meaning of the word filthy. Incest, cannibalism, shrimping, and film historyâs most legendary gross-out ending - Waters and his merry band of Dreamlanders leave no taboo unsmashed in this gleefully subversive ode to outsiderhood, in which camp spectacle and pitch-black satire are wielded in an all-out assault on respectability. In a Blu-ray debut, with new 4K digital restoration, supervised and approved by director John Waters, with uncompressed monaural soundtrack. From The Criterion Collection. Read more here ... 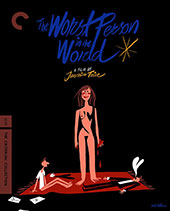 Renate Reinsve won the Best Actress prize at Cannes for the revelatory, complex performance that anchors "The Worst Person in the World (2021 - Norway), a sprawlingly novelistic film by Norwegian auteur Joachim Trier, an emotionally intricate and exhilarating character study of a woman entering her thirties. Amid the seemingly endless possibilities of the modern world, Julie (Reinsve) vacillates between artistic passions and professions, the question of motherhood, and relationships with two very different men: a successful comic-book artist (Trier regular Anders Danielsen Lie) and a charismatic barista (Herbert Nordrum). Working with a team of longtime collaborators, Trier and his perennial co-writer Eskil Vogt construct in "The Worst Person in the World," the Oscar-nominated third entry in their unofficial Oslo Trilogy, a liberating portrait of self-discovery and a bracingly contemporary spin on the romantic comedy. On DVD, Blu-ray, with new 2K digital master, approved by the director, with 5.1 surround DTS-HD Master Audio soundtrack on the Blu-ray. From The Criterion Collection. Read more here.

When blind former skier Sophie accepts a last minute house-sitting job in a secluded mansion in "See for Me" (2021), starring Skyler Davenport, Jessica Parker Kennedy, Laura Vandervoort and Kim Coates, she awakes in the middle of the night to find the house under invasion by a group of thieves seeking a hidden safe. Her only means of defense: a new app called âSee For Me,â which matches her with a volunteer across the country who uses Sophieâs cell phone to see on her behalf. Stubbornly independent, Sophie is reluctant to accept help until she is connected to Kelly, an army veteran who spends her days playing first person shooter games. On DVD, Blu-ray, from IFC Midnight ... 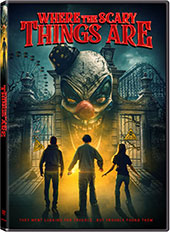 In "Where the Scary Things Are" (2022), starring Paul Cottman, Michael Cervantes, Peter F. Cote, Quinn Andrew Fickes, Selina Flanscha, Oliver Givens and Emma Lim, the horror begins as Ayla and her high school friends discover a hideous, semi-human mutant. They keep it prisoner while shooting repulsive viral videos, with the gangâs hunger for âlikesâ driving them to film the beast performing murderous acts. When one boy sees that Ayla is using the monsterâs gruesome violence to settle her own vendettas, he threatens to tell the authorities - but is he too late to save his friends? From Lionsgate. Read more here ... In "Mothering Sunday" (2021), starring Odessa Young, Josh O'Connor, Colin Firth and Olivia Colman, on a warm spring day in 1924, house maid and foundling Jane Fairchild (Young) finds herself alone on Mother's Day. Her employers, Mr. and Mrs. Niven (Firth and Colman), are out and she has the rare chance to spend quality time with her secret lover. Paul (O'Connor) is the boy from the manor house nearby, Jane's long-term love despite the fact that he's engaged to be married to another woman, a childhood friend and daughter of his parents' friends. But events that neither can foresee will change the course of Jane's life forever. On DVD, Blu-ray, from Sony ... Experience the next chapter of Black horror in "Horror Noire" (2022), an anthology of terrifying tales: six stories showcasing Black actors, directors and screenwriters, featuring racist vampires, supernatural creatures and Satan his damn self. Stars Lesley-Ann Brandt, Luke James, Erica Ash, Tone Bell, Brandon Mychal Smith, Sean Patrick Thomas, Peter Stormare, Malcolm Barrett, Rachel True and Tony Todd. From RLJE Films.

"Scooby-Doo! and Guess Who?: The Complete Second Season" (2021) is a four-disc set with all 26 animated episodes. Scooby-Doo recruits a different pop culture icon to join the gang in every episode of Season 2. Music icon Cher returns to the mystery-solving stage 50 years after her first team up with Scooby, Fred, Velma, Daphne and Shaggy. Terry Bradshaw gets off the bench to tackle a case, Axl Rose will rock some monsters, and Jason Sudeikis will have villains laughing out loud. Classic Scooby fans will see Sandy Duncan returning to team up with the Mystery Inc gang. And how about Kacey Musgraves, Tim Gunn, Jessica Biel, Macklemore and many more. From Warner.