FROM THE BIG SCREEN:
"Gretel & Hansel," "Bloodshot"and "I Still Believe."

THIS WEEK'S BEST BETS:
The great Jason Robards recreates his Broadway role as the iconoclastic Murray Burns in this big-screen adaptation of "A Thousand Clowns" (1965). Murray is funny, feisty, compassionate and very determined to have nothing to do with the lemming-like rush-hour world. But his resolve is tested when social workers Sandra (Barbara Harris) and Albert (William Daniels) tell him that he must shape up ... or his 12-year-old nephew Nick (Barry Gordon) will be shipped out to a foster home. Released when workday lifestyles went largely unchallenged, 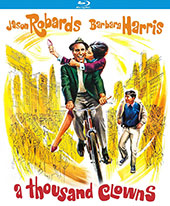 this inventive comedy-drama gleefully speaks to the nonconformist in us all. Martin Balsam, Gene Saks and John McMartin co-star in this classic film directed by Fred Coe with a screenplay by Herb Gardner based on his own play. "A Thousand Clowns" won the 1966 Oscar for Actor in a Supporting Role (Balsam) and was nominated for three more Oscars: Picture (Coe), Adapted Screenplay (Gardner) and Score (Don Walker). In a new 2K master. A Thousand Clowns

is oN DVD, Blu-ray, from Kino Lorber Studio Classics ... "Tea With the Dames

" (2018): What happens when four legends of British stage and screen get together? Maggie Smith, Judi Dench, Eileen Atkins and Joan Plowright are among the most celebrated actresses of our time, with scores of iconic performances, decades of wisdom, and innumerable Oscars, Tonys, Emmys and BAFTAs between them. They are also longtime friends who here invite you to join them for a weekend in the country as they catch up with one another, reminisce, and share their candid, delightfully irreverent thoughts on everything from art to aging to love to a life lived in the spotlight. Newly released to Blu-ray, From IFC Films ... 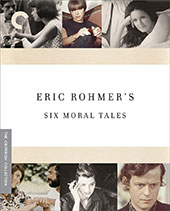 The multifaceted, deeply personal work of Eric Rohmer has had an effect on cinema unlike any other. One of the founding critics of the history-making Cahiers du cinÃ©ma, Rohmer began translating his written manifestos to film in the 1960s, standing apart from his New Wave contemporaries with his patented brand of gently existential, hyperarticulate character studies set against vivid seasonal landscapes. This near genre unto itself was established with the audacious and wildly influential series "Six Moral Tales

" A succession of encounters between fragile men and the women who tempt them, "Six Moral Tales "unleashed on the film world a new voice, one that was at once sexy, philosophical, modern, daring, nonjudgmental, and liberating. Three-disc special edition with new 2K digital restorations, with uncompressed monaural soundtracks. The films: "The Bakery Girl Of Monceau" (1963), "Suzanne's Career" (1963), "My Night at Maud's" (1969), "La Collectionneuse" (1967), "Claire's Knee" (1970) and "Love In The Afternoon" (1972). In a Blu-ray debut from The Criterion Collection. 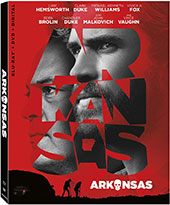 junior park rangers by day, they operate as low-level drug couriers by night under the watchful eye of Frogâs proxies (Malkovich and Fox). Swin then settles into his day job by taking up a relationship with Johnna (Brolin) against orders to blend in while Kyle continues to question his night job by trying to figure out who Frog really is. Their world is then upended after one too many inept decisions, and Kyle, Swin, and Johnna find themselves directly in Frogâs crosshairs. On DVD, Blu-ray, from Lionsgate ... While a small-town widow grieves in isolation, she receives a deadly ultimatum from the privileged sons of a local land developer to sell her beloved property in "Cry for the Bad Man

" (2019), starring Camille Keaton, Karen Konzen and Scott Peeler. With 24 hours to decide and her pleas to the town's corrupt sheriff falling on deaf ears, she realizes she must take matters into her own hands. Her quest for justice turns into an all-out battle and grisly confrontation. From Uncorkâd Entertainment ... In "Better Days

" (2019 --China), starring Zhou Dongyu and (C-pop superstar) Jackson Yee, Nian finds her life at a standstill when facing relentless bullying from her peers as she prepares for her college entrance exam. Fate brings her together with small-time criminal Bei, but before they can retreat into a world of their own, both are dragged into the middle of a murder investigation that will change their lives forever. Director Derek Kwok-Cheung Tsang 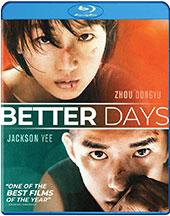 ("Soulmate") paints a bleak picture of an oppressive society, in the guise of a gripping fairy-tale love story, exposing the dark world of bullying and societal pressures of achievement facing todayâs youth. On Blu-ray from Well Go USA ... In "The Lodge

" (2020), starring Richard Armitage, Riley Keough, Alicia Silverstone, Jaeden Martell and Lia McHugh, a soon-to-be-stepmom is snowed in with her fiance's two children at a remote holiday village. Just as relations finally begin to thaw between the trio, strange and frightening events threaten to summon psychological demons from her strict religious childhood. On DVD, Blu-ray, from Universal ... In "The Jesus Rolls

" (2019), starring John Turturro, Bobby Cannavale, Jon Hamm, Audrey Tautou, Christopher Walken, Gloria Reuben, Sonia Braga and JB Smoove, hours after being released from prison for good behavior, Jesus Quintana (Turturro) reunites with his best friend and fellow underachiever Petey (Cannavale). In the first in a series of rapidly escalating bad decisions, they steal a vintage car parked in front of an upscale salon and hit the road for a no-holds-barred joyride â until the car's gun-toting owner (Hamm) catches up with them, wounding Petey. Fleeing the scene with fiercely free-spirited shampooist Marie 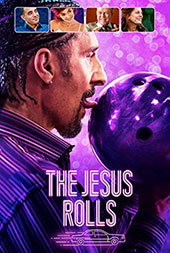 (Tautou), Jesus and Petey continue their adventure in a series of stolen cars, cementing their partnership with an epic petty-crime spree and a three-way romance. A darkly funny, irreverent and freewheeling road movie was written and directed by Turturro and pays tribute to the classic French farce "Les Valseuses." On DVD, Blu-ray, from Screen Media Films ... "Greed

" (2019), directed by Michael Winterbottom and starring Steve Coogan, David Mitchell, Asa Butterfield, Dinita Gohil, Sophie Cookson, Jonny Sweet, Asim Chaudhry, Shirley Henderson and Isla Fisher, is the story of self-made British billionaire Sir Richard McCreadie (Coogan), whose retail empire is in crisis. For 30 years he has ruled the world of retail fashion, but after a damaging public government investigation, his image is tarnished. To save his reputation, he decides to bounce back with a highly publicized and extravagant party celebrating his 60th birthday on the Greek island of Mykonos. A satire on the grotesque 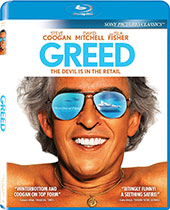 inequality of wealth in the fashion industry. On DVD, Blu-ray, from Sony ... In 2003, the first episode of a little web series called "Red vs. Blue" began streaming on Rooster Teeth and took the internet by storm. Based on the popular Halo video game franchise, this sci-fi comedy was unlike anything people had ever seen beforeâ¦and still is. Now, all 12 episodes of Season 17 will be released stitched together as a single movie, "Red vs. Blue: Singularity

" (2019). The flow of time is in disarray now that Chrovos has been freed from their old prison, and the Reds and Blues are unwittingly trapped, and forced to relive their past memories. Fortunately, there is still one person in the universe who can do something about it: Donut. Thanks to his quick thinking, Donut manages to trap Chrovos in a temporary cell ... but it wonât hold for long. From Warner ... In "Human Zoo

In "A Dog's Courage

(aka The Underdog" (2018 -- South Korea), Jacob, a feisty, playful dog abandoned by his owners, joins a pack of strays and comes to terms with his unwanted and abrupt freedom. With his new friends in tow, Ralph heads north and finds the perfect place of safety and peace -- the demilitarized zone between North and South Korea. Animated family adventure, in Korean and with an all-new English dub. On DVD, Blu-ray, from Well Go USA.

At long last, "Gunsmoke: Complete Series" (1955-1975), celebrating one of the most enduring and acclaimed television programs of all time! All 625 episodes from all 20 seasons of this legendary, multiple award-winning Western are available together for the first time, remastered and restored, along with great bonus features like episodic previews, original cast sponsor spots, audio commentaries, featurettes and more. Relive the timeless tales and exciting adventures of Dodge City's leading 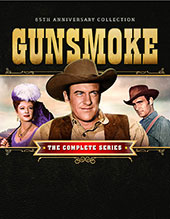 residents: Chester (Dennis Weaver), Doc (Milburn Stone), Kitty (Amanda Blake), Quint (Burt Reynolds), Festus (Ken Curtis), Sam (Glenn Strange) and the first citizen of Dodge himself, U.S. Marshal Matt Dillon (James Arness). This is the definitive complete collection that no "Gunsmoke" enthusiast can do without On DVD from CBS/Paramount ... "Gunsmoke: The Final Season" (1974-75) is a six-disc set with all 24 episodes. A classic concludes, remastered and restored, from 35mm film elements. Even on the wide expanse of the frontier, all things must end. Savor these gems and more from "Gunsmoke's" 20th season. With location filming at Old Tucson, Matt (James Arness), Festus (Ken Curtis) and Newly (Buck Taylor) pose as outlaws to outwit bandits who've captured Doc (Milburn Stone). Matt enlists an ex-lawman, now an alcoholic, to help clean up a lawless town. Someone is killing men in Dodge; 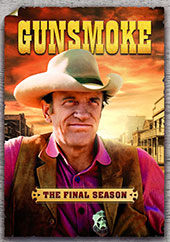 Matt and Newly realize all were involved in a trial years earlier, and Doc is the next victim. And in a multiple award-winning*, poignant episode, "Thirty a Month and Found," three itinerant cattle drovers take desperate measures when they sense their cowboy way of life is vanishing. From CBS/Paramount ... "Humans: Complete Collection" (2015-18) is a six-disc set with all 24 episodes. Uncut UK edition Blu-ray collection debut of the AMC sci-fi series that explores the intersection of man and machine with emotional depth and pulse-pounding tension. In Series 1, when Joe Hawkins buys synth Anita, he hopes it will relieve the pressure on his lawyer wife, Laura. Although Anita is a hit with Joeâs young children, Laura feels uneasy about sharing her home with a synth. Meanwhile, retired synth engineer George refuses to dispose of his beloved but malfunctioning synth, Odi. And mysterious Leo hides secrets that could transform the future of synth technology. Then in Series 2, synths become an inextricable part of society, obediently serving and protecting the human population. But what happens when these Synths are given the right to consciousness and their own free will? Series 3 is one year after the dawn of consciousness. A decimated and oppressed Synth population fights to survive in a world that hates and fears them. Based on the award-winning Swedish sci-fi drama "Real Humans." On Blu-ray from Acorn Media ... 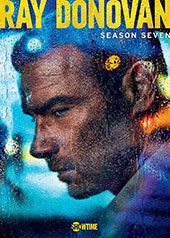 "Ray Donovan: Season Seven"" (2019-20) is a four-disc set with all 10 episodes. Ray Donovan (Liev Schreiber), a clever man with questionable skills, is a South Boston thug turned Hollywood fixer. His duties include absolving athletes, celebrities, and tycoons of their problems. Donovan's father, Mickey, is also a man with a dubious past, spending much of his life behind bars. Once released from prison, Mickey attempts to make amends and repair his shattered family, but Donovan is wary of his father's motives and goes to great lengths to protect himself and his family. Season seven finds Ray working to be the man his family needs him to be. While he makes progress with Dr. Amiot (Alan Alda), there are dangers from the past that require the Ray Donovan of old. Between NYC mayor Ed Feratti (Zach Grenier), an unrelenting NYPD officer hunting for the truth and clients old and new, Ray struggles to find the balance between fixing for clients and fixing himself. Co-stars Jon Voight and Eddie Marsan. From Showtime/Paramount.