Ichabod Crane's Movie Review of King of Kong: A Fistful of Quarters 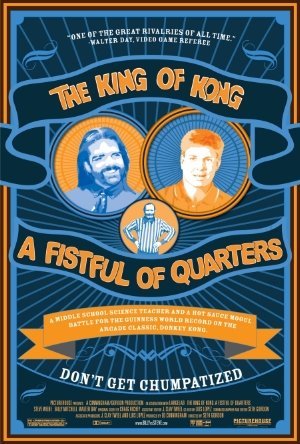 Here is a great documentary that comes off like a inspirational sports movie even though the game involved is Donkey Kong. The story is more than just the rivarly between the average man Steve Wiebe and the "evil" Billy Mitchell who makes for an extremely memorable villian it also shows a strange world of these older people who play these old arcade games and the sub culture that there are with the people involved with twin galaxies. The whole thing is facinating and it moves along extremely well and never feels slow or boring. It tells the side of both men and gives a strong insight to their characters as seen in the film. It shows the mechanics of the scoring and everything else of the game and the way the "elite" video game people deal with it. The odds against Wiebe and everything else I felt was perfectly done. The only negative I can think of this film is that there are untruths to make it more entertaining such as Billy Mitchell is not really as evil as shown but this is just an entertaining movie and is not trying to make some poltical, scientific or otherwise point so inaccurate facts are fine by me.