ikkegoemikke's Movie Review of The Pack (2016) 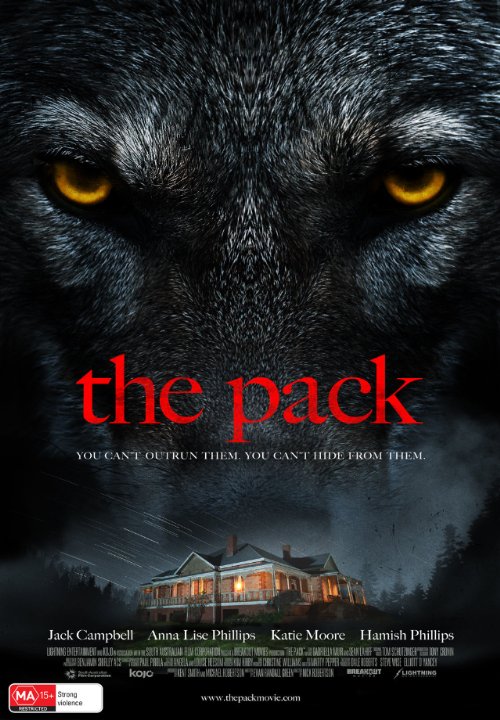 Films made with incredible big budgets, full of stunning special effects and well-known, famous actors, understandably attract the most attention. Sometimes one forgets that it's not only these qualities that'll entertain a movie lover. A fascinating story and the build up of a certain atmosphere is also needed. Something that's grossly overlooked sometimes. "The Pack" is an Australian low-budget thriller (I wouldn't call it horror) made with a budget you certainly can't compare with some films made in Hollywood and with not so famous actors. And also, there aren't any dazzling special effects. You can also say that the story on his own isn't that big of a deal and it's not impressive when it comes to originality (ever heard of "Cujo" or "Burning bright"?). But damn that vibe, the threatening tension and that survival instinct. You can smell the sweat in your living room. Yes, when it comes to atmosphere, you can say they've crammed it in this short but powerful (90 minutes only) film, filled with animal terror.

The makers of this movie didn't waste much time, because before you know it a poor sheep farmer is killed with his guts scattered around a sheep-stable. The responsible ones are a pack of wild dogs or wolves, moving in a militaristic manner. Guess they were sick of hunting defenseless, stupid sheep. Not much of a challenge for them anymore, so they developed the taste for a new prey, as indicated at the beginning. The end result is a kind of "home invasion" film like "You're next" but with animal predators. Whatever the ultimate reason is for their aggressive behavior, isn't explicitly explained. Are they just fierce, wild wolves? Or are they a mutated breed of dogs and the result of an intersection that went wrong? Or are they demonic creatures? The latter came to my mind when watching a scene in the movie. It seemed as if a prowling carnivore went up in smoke. Or was this due to the flickering lights and shadows?

And that's the only flaw in this film. The fact that it all takes place in the evening, makes this film pretty dark. Pitch-dark conditions with deep black wolves running around, isn't an ideal situation. So you really had to guess sometimes what was going on in the darkness. There were also some improbabilities. I doubt it that a predator with such instincts and a sense of smell won't notice a human scent when walking past him or her. But at the same crawling around with a shining flashlight apparently can be done unnoticed.

Further, nothing but praise for this Australian film. I start to appreciate horrors from Down Under more and more. Especially after watching "The Babadook" and "Wyrmwood". Everything feels like "back to basics" and priorities are set differently. There's much more focusing on suspense and tension without many bells and whistles. A straightforward movie experience without annoying intros and explications. The actors performed as expected. A typical family consisting of a stubborn family man Adam (Jack Campbell) who wants to keep his farm at all costs, his wife Carla (Anna Lise Philips) who tries to make ends meet with a veterinarian practice, daughter Sophie (Katie Moore) who's fed up with living on the countryside and Henry (Hamish Philips), the teenage son, future veterinarian and notorious kleptomaniac. The cast is fairly limited. The only people you'll also get to see are the farmer and his wife at the beginning, a banker who came over to talk about their payment problems and a cop on patrol. A short but intense contribution. It wasn't really horror, because the horrific massacres weren't visualized explicitly. Only some bloody close-ups are shown. For the most part you'll only see the bared teeth of the predators. This combined with the intense threat and the exciting cat-and-mouse game between man and predators, made sure it became an exhilarating and exciting thriller. And that's more than enough, mate!