ikkegoemikke's Movie Review of A Walk in the Woods 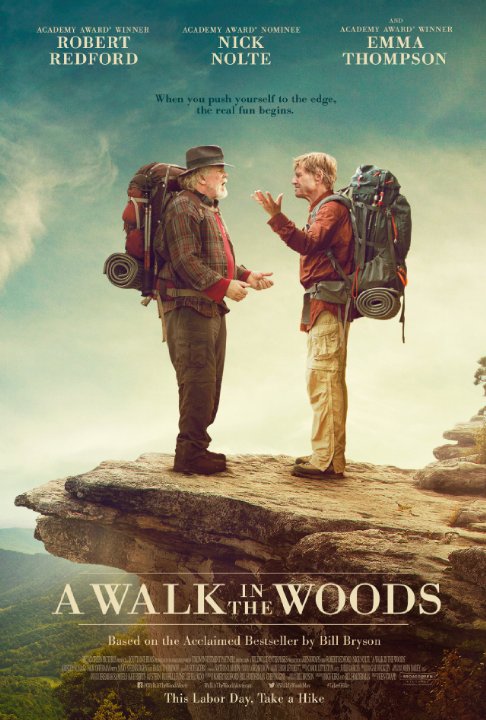 A Walk in the Woods

"No, writers don't retire.
We either drink ourselves to death or blow our brains out.
And which will it be for you?
After this interview, maybe both."

A road movie, but then on foot. With two old-timers puffing like a steam locomotive while walking the Appalachian trail. A trip of approximately 3500 km in the USA. A trip even young people fail to finish. But these two stubborn 70-year-olds won't give in easily and are motivated to reach the finish. And for what reason? On the one hand, there's Bill Bryson (Robert Redford), a writer who mostly writes about traveling. Is this some sort of item of his bucket list? Or is it because a moderator of a television show came with the fact that he never wrote a book about traveling in the US? Or is this his last chance? And then there's Stephen Katz (Nick Nolte), a grumpy old friend with an artificial knee, an ex-alcoholic and someone who needs to eat every hour so he won't get a sudden seizure. All in all, this seems like an almost impossible task. But despite protests by Bill's wife Catherine (Emma Thompson), both seniors embark on this venture.

Films about people hiking through rugged landscapes to experience meditation moments, are quite popular nowadays. Reese Witherspoon demonstrated this already in "Wild". And Robert Redford already tried something similar as a solo sailor in "All is lost". Only there was no dialogue at all in this last film. And its largely present in "A walk in the woods". And to be honest, these dialogs were highly entertaining and at times quite humorous. The whole didn't feel as forced humor and they succeeded (to one point) in not letting it evolve into a sort of slapstick.Two old men, full of life experiences and wisdom, which are trying to push their own limits. Perhaps the obvious lessons of life were a bit cheesy. But this was amply compensated by the witty, amusing conversations and the delightful, ravishing landscapes they walked through.

Perhaps some situations were a little predictable. Like the encounter with local wildlife and the incident with the panties in the laundry with an angry husband as a result. But there were also spontaneously hilarious moments like their meeting with the headstrong Mary Ellen (Kristen Schaal) they would rather not have in their company. Maybe I'm getting old but these two elderly made me laugh more than most recent comedies. Until towards the end the two of them got themselves into an uncomfortable situation. Then it felt a bit tragicomic. A kind of philosophical moment. Luckily I could forgive the makers this misstep because of all the foregoing, comic one-liners and dialogs.

Whether they succeed in finishing the route or not, is actually irrelevant. Redford and Nolte are a perfect duo. You could compare them with Lemmon and Matthau with hiking boots. They look both very old, but mentally they still seem brisk enough. Would those two call me and ask me to accompany them on an inhuman trek, I would take the bait immediately. A fantastic movie.