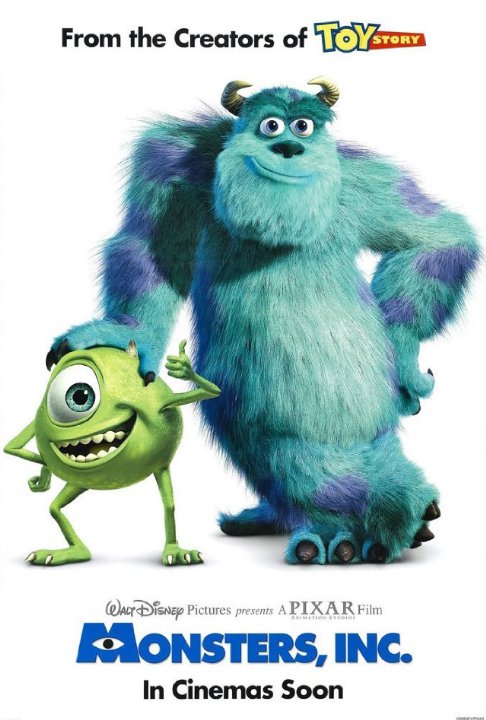 In preparation for the much anticipated release of the 'Monsters Inc." prequel " Monsters University" which arrives no later than June 21st (May I add the day before my son's b-day so guess what he wants to see...win win situation for me) 2013 The kids and I decided it would be cool to watch my Blu-ray copy of the film. There are a handful of animated films that come out each and every year and only a couple seem to make their way into the Kyle dvd collection and Monsters Inc. is one of em. No matter how many times I view this film it never gets stale as it always brings joy and laughter into our hearts time after time. Walt Disney's Pixar crew spared no eye popping color and CGI animated brilliancy delivering this one as they bring to us the story of what actually lurks behind those darkened closet doors at night causing children to scream and flee to their parent's room. (My kids when much younger did this quite frequently).

The story, if you haven't had the pleasure already of seeing this film, is this... Every child after told to tuck in for the night after the lights go out seems to go through this period in their lives as they stare in cold terror at their closet door. Well behind all those doors of various children throughout the world lurks an huge corporation known as 'Monster's Incorporated" where various monsters and creatures of different size and form along with their assistants, put their employee cards in the slots getting various closet doors in place, where once in they engage in terrorizing whoever owns the room they enter. the children's screams are literally' sucked up' into canisters which are then used for energy in the Monster's world. May seem completely ludicrous to some however no one takes it more seriously then chief and Ceo of Monster's Inc. J.J. Waternoose the third (Voiced by veteran actor James Coburn) whose brainstorm idea was the whole reason that Monsters Inc even exists at all.

Another reason for the company's success is chief scarers James P. Sullivan 'Sully' (John Goodman) and his highly competitive co-worker Randall Boggs (Steve Buscemi) who are constantly at each other's throats as they bid for the top scarer of the week award (An award usually given to Sully) it's just another day at work when after Sully accidentally discovers that Randall, during lunch hours when the floor is supposed to be silent, is secretly trying to get his numbers higher by scariing, Sully sees this and hides from Randall's view, Randall leaves forgetting the door in place where Sully ventures in. Something I should mention yet once again for the peeps out there who have yet to see this film, is that children themselves are considered deadly to the monsters and are not to be actually touched for fear of contamination, knowing this Sully's curiousity gets the best of him and he ventures in the door left behind. The bedroom remains silent with no child in the bed or in sight at all so sully simply leaves. Unbeknownst to him the child from the room in the form of a little girl named Mary (Sully names her boo) who is not afraid of any monster aside from Randall, has entered the Monster's Inc facility Sully tries to escape her in terror as she laughs calling him 'Kitty' and continues to chase him around.

The rest of film has Sully along with his assistant Mike Walzowski (Billy Crystal) trying to hide young Mary 'boo' from being seen by any other monsters and the CDA (Monsters Inc.s own team of child cleaning commandoes) and especially Randall as they try to get Mary safely back to her bedroom.


If you are contemplating an excellent family night themed film and haven't yet seen this one may I suggest it by all means...It will make you laugh and even cry at parts but it's brilliant all the same.