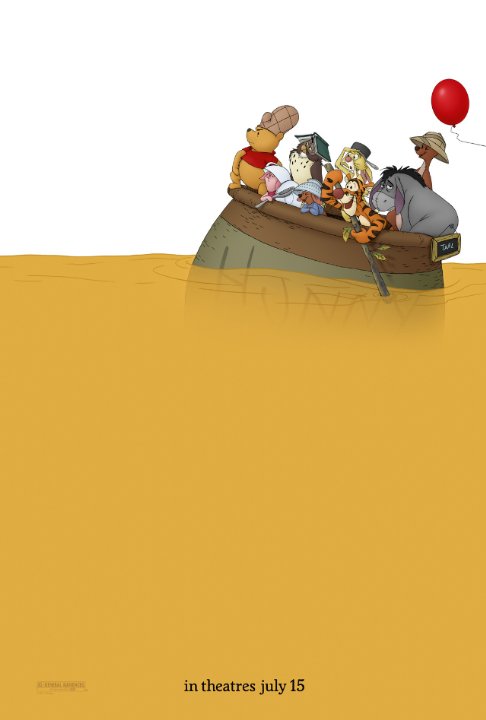 It is no secret that I am a huge fan of Winnie The Pooh. And if it was, it's not any more. So believe me when I say that the latest adaption is one of the very best.

The newest installment in the beloved series of Winnie The Pooh films is about, both a search for Eeyore's tale, and a plot to trap a creature that has supposedly captured Christopher Robin.

All the charm and fun of the rest of the Winnie The Pooh films are present here. Short songs and nostalgia help as well.

The voice cast performs well, though some of the new voices may bother you at first. Jim Cummings plays Pooh and Tigger, and Bud Luckey (who you'll recognize as Chuckles from Toy Story 3, among other Pixar films) has been cast as the ever depressed Eeyore. The other cast members shine as well, once you get used to them that is.

The animation is simple and beautiful, but during one musical number, where everything appears to be turning to honey, the animation grows much more detailed. CGI and motion capture are great, but nothing beats the traditional stuff.

The music is wonderful as well, and the Winnie The Pooh theme song at the beginning revived many glorious memories.

The characters may not be quite as you remembered them, though. Piglet is a bit more chipper. Owl shows a lot of emotion in his eyes. And Rabbit, while still acting superior to the rest, seems to have lost some of his crankiness. Also, Christopher Robin has changed his wardrobe and his eyes are no longer little specks. This, to me, was the change I liked the least, but I didn't mind. Too much.

The film is also surprisingly funny. This is easily the most humorous of all the Winnie The Pooh adaptions, and it made me laugh much more than other so called "comedies" out there.

My only real complaint about Winnie The Pooh is it's run time: An all too short 63 minutes. I know that kids don't have the longest attention span, but this trip down memory lane felt a little short.

Winnie The Pooh is just as wonderful as ever, and I do hope this film is only the beginning of another league of movies from our friends at the Hundred Acre Wood.