JLFM's Movie Review of The Untouchables (1987) 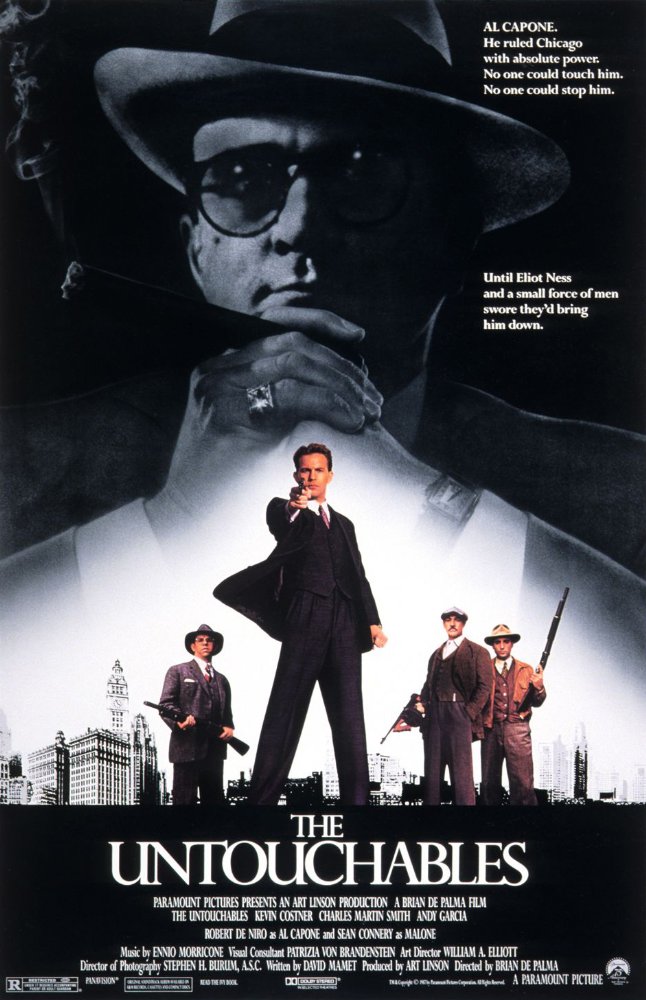 I saw a movie earlier this year called Valkyrie. It was about a group of men who were determined to assassinate Adolf Hitler, and were willing to go to great heights to do so. For the most part, though, Valkyrie was dull and uninspired. And while The Untouchables reminds me distinctly of Valkyrie, The Untouchables is far from from dull or uninspired.

Similarly to Valkryrie, The Untouchables is about a group of men- A lawman named Elliot, a cop named Jim, an accountant named Oscar, and a cop-in-training named George- who all share an interest in bringing a villainous man to justice. In this case, it's Al Capone. With alcohol made illegal, Al Capone is making a fortune illegally selling booze. Elliot and co intend to prove Capone is guilty, but Capone has his resources.

Like Valkyrie, The Untouchables is superbly acted. You really believe in the characters. Their loss is yours. They're unforgettable; all thanks to the actors. Kevin Costner is a believable family man. Sean Connery gets more one liners than the rest of the cast combined. Charles Martin Smith is the nerd-becomes-cool characters and acts with personality to spare. But most of the kudos has to go to Robert De Niro, who plays Al Capone. He's easily the most iconic of the characters in the film, and he's appropriately nasty.

Unlike Valkyrie, we're given some top-notch action. We don't just get one or two decent action scenes; we get a whole mess of them, and none of them are cheap or forgettable. They're all thrilling and heart-pounding. All of them, unique show-stoppers. Just a sampling; a gun fight with smugglers on a bridge, the classic "train station" scene, and a frantic roof-top chase.

The score has become quite iconic, so I'll spend a little time discussing it. Composed by Ennio Morocone, the score is a clever mix of incidental music, jazz, and retro 30's music. And while the score is memorable, and undeniably incredible, the percussion often overpowers, and some of the music in the "sweet" scenes is a bit too run of the mill for my taste. And while this does make the score a little less excellent, it is, unarguably fantastic.

The Untouchables is a fun and sometimes frantic film, with a memorable score, fantastic acting, and some unforgettable action sequences. And while I wouldn't say it's quite untouchable, it's unexpectedly smart and entertains to the last minute.